There are many days I find myself wishing I could have a glimpse into the future. No, not to know the winning Lotto numbers, who will win elections or if feathered bangs will ever be popular again. No. I want to know if my children will be productive members of society when they grow up, or will they be serial killers or [shudder] a politician one day. I feel like if I knew that it was all going to turn out okay, I could get through the bat shittery of their youth.

First Born Male Child is the one I worry about the most. Ever since he was a baby, I’ve always thought, “I am not parenting this child right.” I took him to Mommy & Me groups to play with other babies. But no. He wanted to hang out with the other moms. He’d crawl over, climb on a lap and turn on the charm while I sat and sang “Wheels on the Bus” by myself like an idiot. Later on, everything became a costume or a prop for the epic adventure he was acting out that day. Games and toys have rarely been used for their intended purpose at our house. They are either dismantled, combined with another toy, used as some sort of odd weapon or promptly lost.

On Monday I broke down and braved FBMC’s room. It had reached nightmare levels of chaos and mess and I couldn’t take it any longer. I am by no means a neat freak and have come to terms with the fact that my house will never be “company ready” no matter how hard I try. 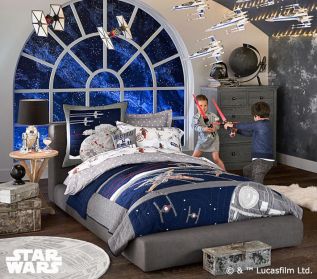 I don’t expect my kids’ rooms to look like a PotteryBarn Kids catalog spread (as much as I would love that.) But I do expect to be able to step foot in them and actually touch carpeting with my foot rather than ten layers of dirty clothes (and probably clean ones that never got put away,) or have to wonder if I just felt something wet or was it alive?! God please let it have just been yet another towel that didn’t get hung up.

After Halloween, I knew it was probably going to be pretty bad, so I took a last swig of coffee, braced myself and went in. Garbage bag: check. Empty hamper: check. Lysol wipes: check. I was ready to do battle. “Okay. Let’s start with the big things. Make the bed first — rooms always look nicer with the bed made.” I pulled back the rat’s next of covers and immediately regretted it. I found wadded up clothes at the end of the bed, various candy wrappers, a half-eaten sucker stuck to the sheet (Lysol wipe that … fresh sheets are the least of my worries today,) and three different light sources to read by: mini finger “laser” pointer, dagger-style light saber and R2D2 flashlight. I confiscated the latter, threw out the former and moved on.

Next I filled up the hamper with all of the clothes that were everywhere but in their proper drawers (which of course were left open) or in said hamper where they belonged. I didn’t torture myself further with the sniff test for cleanliness — in the hamper it all went. Then I de-garbaged the floor, since he couldn’t fit any more in his garbage can, which was full of toilet paper which he had TPed his brother and sister’s rooms with for the umpteenth time. (His next allowance is going toward my next Costco run.) I still hadn’t found the remainder of the ten pounds of candy he had collected on Halloween. There was certainly plenty of dead wrappers and spilled Nerds and random (hopefully) chocolate ground into the carpet, but where was the rest?

*Sigh* I chugged some more coffee and decided it was time. [Insert horror movie music] Under the bed. Sweet baby Jesus, hold my hand. After clearing away a few inches of candy wrappers, I found it. All neatly sorted by type into baggies. (Sorting candy motivates this kid…laundry, not so much.) Then I found the bowl within another bigger bowl, filled with water and candy — wrapped and unwrapped. No that wasn’t completely vile or anything. (I was later informed by the perpetrator that you can spin the bowl within the bowl when there’s water in it and it’s super cool. And he also wanted to see which colored the water better: M&Ms or Skittles. I blame his second grade teacher for that one.)

After confiscating the good candy and carefully getting rid of the candy sludge, I went back in. I found a half-full ketchup bottle. Since there wasn’t any evidence of fries or hotdog buns, I figured he was hoarding it for a stupid fake blood prank of some sort which I had hopefully avoided. Then there were some petrified chocolate chip cookies (which reminds me I should bake some since I haven’t baked that type in months) and random bobby pins of mine (is he planning on becoming a burglar and has been practicing his lock-picking skills??) 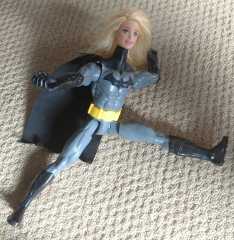 But my favorite find was Bat Barbie. HA! I knew the whole Bruce Wayne schtick was BS! Barbie has been Batman all along! Or was FBMC really turning into Sid, the mean neighbor kid in Toy Story who tortured all the toys? Hmm. It’s probably a toss-up. My friend encouraged me to mess with him, so I left this scene for him when he came home: 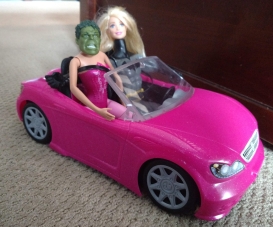 But really the best part of Bat Barbie was when I got a call from the assistant principal at his school today while I was at the school dropping something off. He had brought Bat Barbie to school and was tormenting kids on the playground with it. Lucky for him, she was cool about it. Since I was there in person, I bequeathed Bat Barbie to her and she/he now has a place of honor upon her bookshelf. (I’m not sure which pronoun to use for Bat Barbie. My apologies.) I think my next batch of chocolate chip cookies will be dedicated to the assistant principal.

But Bat Barbie has not been my favorite FBMC find of all time. No, it wasn’t even when I found a half dozen pairs of Young Son’s super hero undies in the hydrangea bush beneath FBMC’s window. 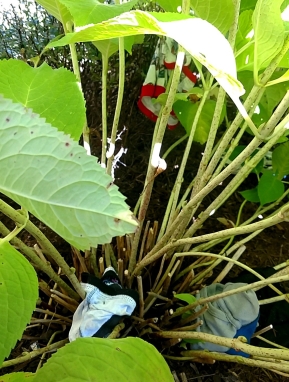 My favorite find was a few years ago when he was in about first grade. I found a bunch of purple tampon applicators scattered around his room. Just the applicators and a few random wrappers. When I got over my initial horror and questioned him on why he had them, he matter of factly replied, “I’m using them for magic potion dispensers.” I never did find out where the actual tampons went, and frankly I don’t think I want to know. So ladies, I’ll leave you with this little gem to think about when that time of the month rolls around again. May it be magical. You’re welcome.