I know you’ve all been dying to know how the Pediatric Psych Ward’s vacation went. Was it fun? Was it epic? Did anyone die? Well, first let’s get one thing clear. It was a “vacation” for the inmates…not so much for the wardens. I’d say it was more of a “trip” — lots of planning, packing, panicking, yelling and just overall work. Let’s not forget about the laundry. I swear to God their suitcases breed dirty laundry, and we somehow came home with three times the amount of crap than we went with!

The trip up to The Dells was pretty uneventful and fairly peaceful. The inmates finally figured out a lot of our idle threats leading up to the trip to leave them at Uncle Gruff’s instead if they kept being such jerks were maybe not so idle. Once we arrived at Great Wolf Lodge Resort, they all stripped down and wrestled on their swim gear and were ready to hit the water almost before we even got to our room. So much for settling in.

First Born jumped out of his flip flops mid-stride and was off like a shot the minute we walked in the door to the water park.  “Oh well. He’ll find us when he’s hungry,” I figured. Young Son and Dear Husband left to explore, so Warrior Princess and I stashed our stuff and headed over to the water tree fort,

which had lots of spray areas and interactive toys. “Let’s ease into this place,” I thought. It was all going well until a loud bell started clanging and kids started screaming and running all over the place. “Oh crap! Something bad’s going to happen!” WP froze and looked up at with me with huge, terror-filled eyes as 1,000 gallons of water came crashing over us. Yeah. So that sucked.

We high-tailed it out of there and ran into Young Son, Dear Husband and First Born. FB was unsuccessfully trying to get YS to go on the water slide, so DH took one for the team and went with his thrill-seeking son.

We wandered over to the Lazy River — that would be more our speed, right? Lemme tell ya. Nope. Not so lazy. The WP and I decided to try it out together and YS reluctantly went solo. I got him situated on his own tube, gave him a shove and wished him God speed as he went spinning around in white-knuckled circles down the river. Then I managed to wrangle a double tube for ourselves. Okay. Now how was I going to mount this cursed thing with some shred of dignity? Well, if there actually is a way to do it in a dignified manner, I eluded me completely. I muscled my way to the entry point with the unwieldy tube under one arm and WP clinging for dear life to the other. I probably knocked over a few young tubers in the process, but oh well. It’s survival of the fittest when it comes to this kind of thing. I slapped the tube in the water, stuffed one leg through the back hole to keep it from floating away and pried WP off of me until she had a proper death-grip on the front seat of the tube. Okay. So now how do I get my squishy butt on this thing without flipping it and drowning my kid in the process? I grabbed onto the hand railing, scootched the tube under my rear end with my feet and went for it. Somehow we didn’t flip, but my resulting position was far from attractive or comfortable. My matronly swim skirt betrayed me and hiked itself up under my pits, thus exposing more of my flabby thighs as I thrashed and scooted around like a fly stuck on fly paper to find proper purchase on the flotation device from hell. Once settled, we bobbled around until a group of young teenaged boys decided it would be fun to race each other around the river. They checked us up against the bank, and I probably uttered some profanities and told them to take their punk asses to the GoKart track down the street. Good Lord. How did I become such a grouchy old lady?! Finally we crashed over to the exit. WP scrambled off with the help of another frazzled mom as I pried the tube off my butt with a loud “thwap!” I distinctly felt neither pretty nor lazy at that very moment.

We decided to check out the wave pool. This could go either way. She was feeling pretty brave with her Puddle Jumper on by this time and was really getting into it. I was relaxing a bit more too. It was reassuring to see all the amazing life guards there — holy buckets, do those people work hard! They were constantly pacing the deck, intently scanning their areas looking for struggling swimmers. There was not a sullen teen life-guard camping out on a chair in sight. It gave my anxiety a rest knowing professionals had my back in case one of the inmates got into trouble under my watch. Between wave sessions, WP was happily splashing around when she looked over and found herself eye-level with some dude sporting some serious butt cleavage. She looked over at me in amazement, “Mom! That guy has a hairy booty hole!” (Thank First Born for teaching her that gem…) Jeez. I don’t think Mr. Chewbacca heard us, but we quickly swam off nonetheless to avoid seeing the flip side of that hairy mess.

Eventually we re-grouped and decided to call it a day and do some more the next day. We went back to the room, ordered some pizza and it was time for bed. The kids had a 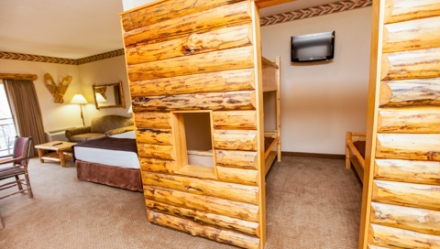 special little “cabin” within our room with a bunk bed and a single bed…after some very complicated rounds of “rock, paper, scissors” to decide who was going to sleep where, beds were claimed, jammies donned, teeth brushed and potties done. WP was beside herself with glee that she got to sleep in the same room with her big brothers. She even decided to go shirtless to be like them. (I guess wearing her brother’s underwear isn’t enough. At this point, I’m waiting for her to decide she needs to pee standing up.) Eventually she settled down after they threatened her with various forms of violence if she didn’t stop giggling.

Husband and I finally got to enjoy our Wine Down service by romantic phone screen backlight as we silently surfed the web, scrolled through Facebook and read the news for the day. It was actually pretty great. Was it a perfect, relaxing, rejuvenating time? Oh hell no. But was it fun? Yes. Yes it was. It was good to be with other families enjoying time together, witnessing other kids’ meltdowns (and not just our own), seeing other parents rocking far-from perfect mom and dad bods. It was real. It was family in all its imperfection… and hopefully some really great memories were made by all. Will we do this again? Absolutely. But it’s going to take awhile for me to get through all the unpacking and recovering. In the meantime, if you need me, you can find me taking a nap in a pile of laundry somewhere.