It’s been a rough week, friends. We managed to survive Thanksgiving break I think. To be honest, most of it is but a distant memory which has been wiped out by the horrors of this week.

It all started on Sunday night. I was looking forward to finally having a few hours to myself on Monday after nine days of the kids being home. Then a text message from the school district popped up. Monday was declared a snow day due to the severe winter storm that was predicted. NOOOO!!! Come on, people! Eight to thirteen inches of snow is not that big a deal. Throw some chains on the bus tires and round up these misfits! Teachers and staff can’t make it in? Oh puh-leez. I could send out one group text message to fellow moms and we’d be on the streets en masse in our all-wheel drive mini vans and 4-wheel drive SUVs faster than you can say “Starbucks Run” to personally chauffeur each precious teacher right to the front door of the school to save us from our spawn.

Fine. Fine. Safety first I guess. At least with a snow day I could shove the kids outside to play or to a friend’s house to eat all their groceries and make messes there. (My apologies their friend’s moms. I owe you.) Thus another day was survived. Then at 1:30 AM Karma remembered. I woke up cursing First Born thinking he’d cranked the heat up to 84 degrees again. I stomped downstairs and checked the thermostat. Nope. Just where I left it. And then it hit me. For the next five hours I was violently ill every twenty minutes. Dear Husband came downstairs in the morning to get on an early morning conference call and found me in a heap on the couch. “Is something going on? Why are you down here?” I was too delusional and exhausted to give him one of my signature, “I loathe you” sneers.

I went upstairs to continue my slow, painful death. I stopped in the kids rooms to wake them up, “Guys. Mom’s super sick and I need your help. Can you please do a good job getting ready for school for me?” And you know what? They did! First Born got ready, got his little sister dressed and they all went downstairs. I rapid-fire texted some reminders to my husband whilst I curled up in the fetal position in my bed. Everyone managed to make it to school with just a marginal amount of yelling. The rest of the day was a blur of hallucination-riddled dreams and trying to keep down sips of water.

Just as I thought I was starting to peek around the corner of health later that night, Satan’s Wrath came for Dear Husband and beat him into submission. Hard. He was down for the count. Luckily we both prefer to suffer alone and in silence. Later that day I left him to suffer in peace and went on a Target run to get the bare necessities, but collapsed in sheer exhaustion next to him as soon as I got home. Eventually we both survived the day and were beginning to feel human again, so after the kids went to bed we started to binge watch Schitt’s Creek on Netflix (highly recommend, btw…) 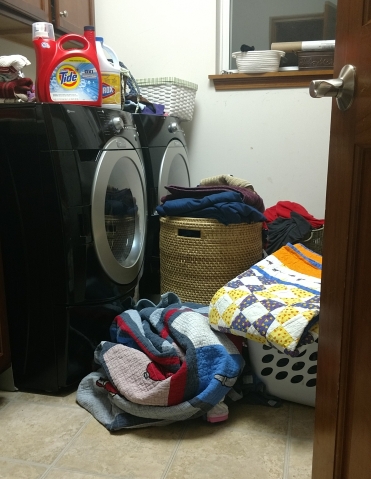 Evidently, Karma was not done with our family and sent Satan knocking again, this time for Warrior Princess. I heard her coughing and went up to check on her, only to step in … Well…let’s just say I’m going to need to have her carpeting deep cleaned, or maybe just burn it and start over. DH heard me cursing and came up to find me stripping down her bed. He took one look and said, “I’ll go wash her fancy teddy bear that got hit with her toxic waste!” And quickly exited while I scrubbed carpeting, changed sheets and settled her back into bed.

I gaggingly shoved the carnage into the washer, set it to the hottest setting to nuke away the germs, and collapsed into the chair to watch some more Schitt’s Creek — Lord knows I needed some ironic comedy at this point. Alas, it was not in the cards. We heard crying coming from upstairs, thinking it was round two for dear princess. Nope. It was Young Son this time and it wasn’t pretty. He managed to hit every bit of bedding, and let’s just say I could tell he’d done a good job eating his vegetables at dinner. As we were stripping his bed, round two was starting up in darling daughter’s room. Somehow we got everyone cleaned up and back into bed. I wrapped up laundry loads two, three and four and tossed them in the laundry room and shut the door on the horror show. Comedy was no longer going to save us. We quit and went upstairs to bed, but I stayed awake since I knew the next rounds were coming soon. Luckily YS was one and done. WP fought four more rounds that night, but woke up triumphant in the morning.

It was now Thursday morning and we were four for five. I called in absences, cancelled the day’s appointments and YS, WP and I couch surfed for the day. Finally! Friday would be some time for me, right? I got the kids on the bus and savored a few moments of quiet, took a long shower and relaxed. Alas my reprieve was short-lived. You guess it. My phone rang and it was FB’s school. I fearfully answered and it was Nurse Nightingale. “First Born threw up. I’m so sorry.” It’s not like it was a surprise. Literally half of his class was out with the Plague already. At least now the circle of barf is complete and we can hopefully move on.

In my now over ten years of experience of dealing with young kids and stomach flu, I have learned a few things. For those moms who have yet to experience the joys of the stomach flu ravaging the entire house, I share these thoughts and tips with you:

On that note, I’m off to go spray Lysol on more things and throw in another load of laundry. Just a word of warning: the next person who asks me how my Christmas shopping is going is getting throat punched.