I’ve been in a bit of a slump lately trying to come up with something to write about, so I Googled, “blog writing prompts.” It came back with, “What were your favorite toys as a child? What did you like to create?” As I thought about it, lots of weird things came to mind. Frankly I’m surprised some of them didn’t clue my parents in that I was a bit off, but…

When I was in fourth grade, my parents and I moved from Wisconsin to Bismarck, North Dakota in the dead of winter. Yeah. It was as hellish as you’re probably imagining, and it didn’t get much better over the six years that we lived there. I had gone from having lots of friends in school and in my neighborhood, to a couple of marginal ones at best.

To get through my loneliness, I found myself coming up with more and more elaborate stories for my Barbies, complete with subplots, love triangles and cliffhanger endings until my next play time.

My favorites involved Beauty Secrets Barbie (what those secrets were, she never told me) and her friends Western Barbie and Ken with horse, Dallas. (Ironically, I think most of my more sordid and scandalous story lines came from watching the show, “Dallas” every Friday night.) At some point, Ken knocked up both Beauty Secrets and Western Barbies. One of my old Little People dolls was the love child. Some days Western Barbie would bitchily gallop off on trusty Dallas, throwing a “F-you, BS Barbie!” wink over her shoulder. (Western Barbie had a button in her back you could push and she would actually wink with her heavily mascara-ed and blue eye-shadowed eye.)

I never had the Barbie Dream House or tons of accessories — I made those. My Barbies even had a pimpin’ water bed made out of a shoe box and a ZipLoc bag filled with water, complete with custom-made bedding and throw pillows I had sewn out of my mom’s fabric scraps. I probably embroidered it with counted cross stitch. Like I said, I was lonely and bored.

I have no idea what fate befell BS, Western, Ken & Dallas. Maybe they’re in a box somewhere in my mom’s basement. Or maybe they went the way of my husband’s GI Joe with the Kung Fu Grip — there is still a hot debate whether or not his mom gave it away or threw it out. When we were still dating, to help ease my husband’s loss, I bought him his very own vintage GI Joe with the Kung Fu Grip on Ebay. 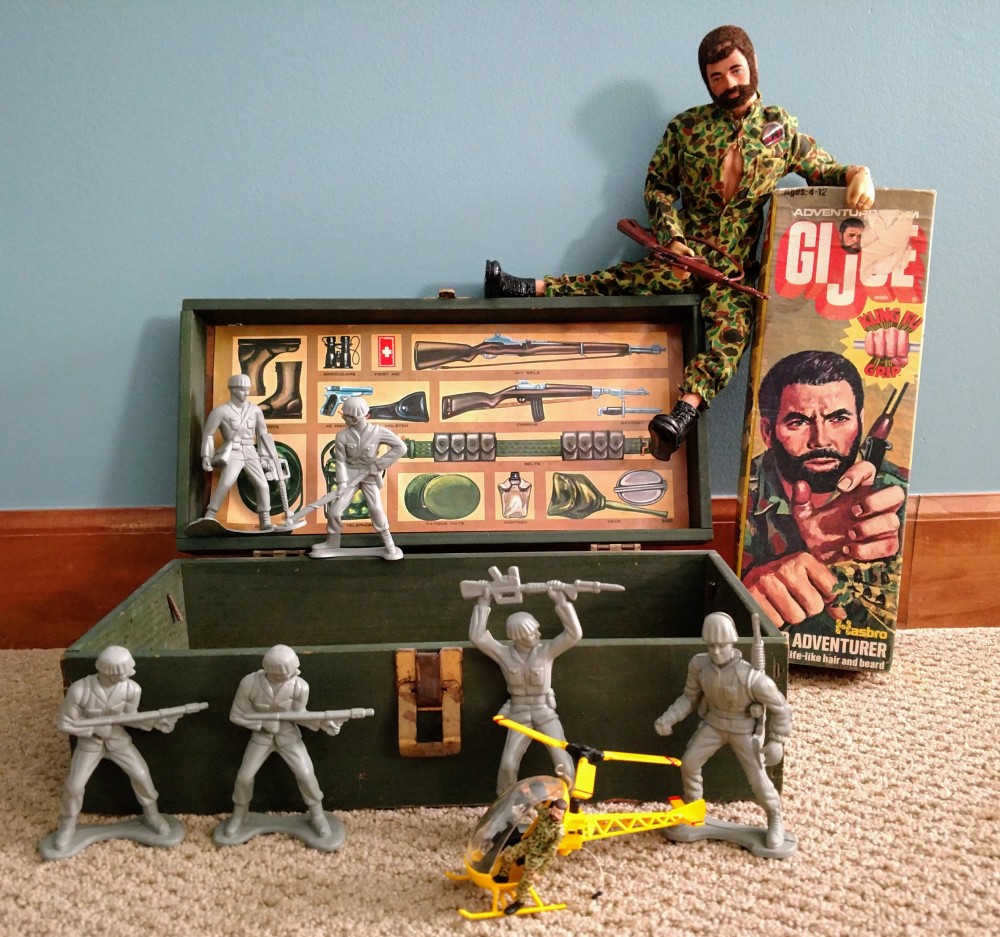 Never in my life have I spent so much money on something so ugly. It was that Christmas that my mother-in-law knew that her son loved me and we were destined to be together. Thinking about these beloved toys, I wonder what my children will look back on as their prized possessions of their childhood.

Now that we finally have Christmas behind us and some semblance of routine back after nearly 3 weeks, going back to school for the boys couldn’t have come soon enough this week. I know I’m not the only mom who did an embarrassing happy dance in the driveway as the bus pulled away on Monday. Just hearing the roar of the engine, the hiss of the brakes and the intoxicating smell of diesel exhaust put an extra skip in my step and twinkle in my eye. But now Monday is yet another day off. Crap. Isn’t this just cruel and unusual punishment? I mean I fully support the MLK holiday and all, but couldn’t we move it a little bit later? My family can’t stand the sight of each other yet, why torture us so soon? I need to find something for the inmates to do so the cops don’t end up getting called. Maybe I’ll give them this mission: “Go through your toys and put aside those things that don’t inspire you. Maybe they can inspire another kid who could use a toy.”

Oh hell. Who am I kidding? I know they’re just going to give me the equivalent of the Western Barbie F-you wink and go back to their electronic devices. *sigh* As long as they’re not killing each other…